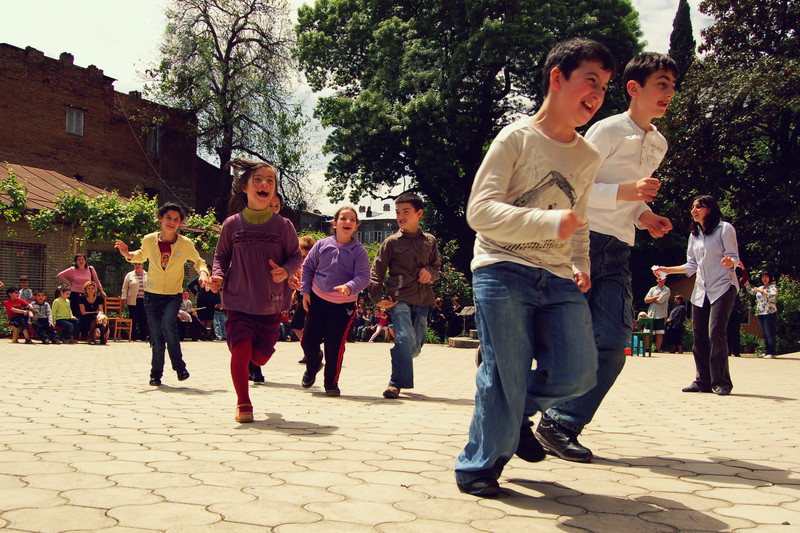 The disabled are among the poorest groups of people in Georgia. In this culturally rich country on the edge of Eastern Europe, access to education and health is often extremely difficult for this often isolated group of individuals. The number of government facilities, which are mainly geared to the needs of adults, is low. The Centre of Free Pedagogy in Tbilisi has been supporting children and adolescents in need of special care holistically in their development since 1991 and enables them to participate fully in society. The focus here is not on any weaknesses but the entire person with all his or her potential.

The approximately 2,000 square meter site of the Centre of Free Pedagogy is situated in the heart of Georgia’s capital city. Up until 2002, the former School of Defectology was located here, which as the name suggests, is a purely deficit-oriented clinical relic from the Soviet era. After an earthquake destroyed the building, a new one was erected there based on anthroposophical views four years later – bathed in light with organic shapes and colours as well as many natural materials and expressionist stylistic elements. This project was enabled at the time in particular by the commitment of The Friends of Waldorf Education in cooperation with the Federal Ministry for Economic Cooperation. In the meantime, this and another building can accommodate more than 130 children and adolescents, some with the most serious mental or physical impairments, and support them individually in small groups. This is because the on-site programme has been growing steadily for years and enjoys a good reputation nationwide. In addition to the Michaelschule, the centre now also includes three kindergarten groups working in curative and Waldorf education, an early support centre, a psychological and pedagogical rehab centre as well as several workshop and creative studios including a café for parents and an affiliated seminar for the practical training of curative educational specialists. All the centre’s institutions have always worked hand in hand and enable the children to be educated and cared for with love from their first year of life onwards until deciding on their career paths.

Even though two flood damage events hit the centre hard again in 2015 and 2018 and there is a constant lack of government support, the focus here is on people with their individual needs and strengths one day at a time. Despite all the adversities, such as wooden floors coming apart and defective sanitary facilities. “The great internal conviction of how meaningful our own actions are is expressed in the unwavering gratitude and dedication of our staff, who persistently improvise despite the many obstacles,” Michael Anders emphasizes. The project manager responsible at the Darmstädter Software AG Foundation (SAGST) has long felt an affinity with the facility and admires the unstinting effort of the educators, for whom it is often “not enough to live without additional employment,” Anders adds. This is because their monthly income is extremely low due to a lack of government funds and does not cover their ongoing expenses. This is also confirmed by Marina Shostak, principal and co-founder of the Michaelschule, who cares greatly about her team’s wellbeing. “We would like to give our teachers and staff stable financial conditions and confidence in the future, without having to compromise when it comes to class sizes and therefore the quality of education.” This is because small groups of five to ten pupils are necessary in particular, as this is the only way they can meet the needs of children with physical and intellectual development problems.

In order to improve the working and living conditions of all involved in the medium term and to safeguard the building itself, SAGST supports the centre in its urgently needed renovation and repair of the water damage. This includes renewal of the floor, wall and stair coverings as well as the replacement of defective sanitary facilities. In addition, the fire alarm, heating and electronic systems are to be optimized and coverage of the currently unusable wheelchair ramp is to be fundamentally overhauled. As SAGST project manager Michael Anders says, “In doing this, we would like to empower people locally to continue dealing with each other in such an appreciative manner and adhere to our shared vision of an inclusive community.”