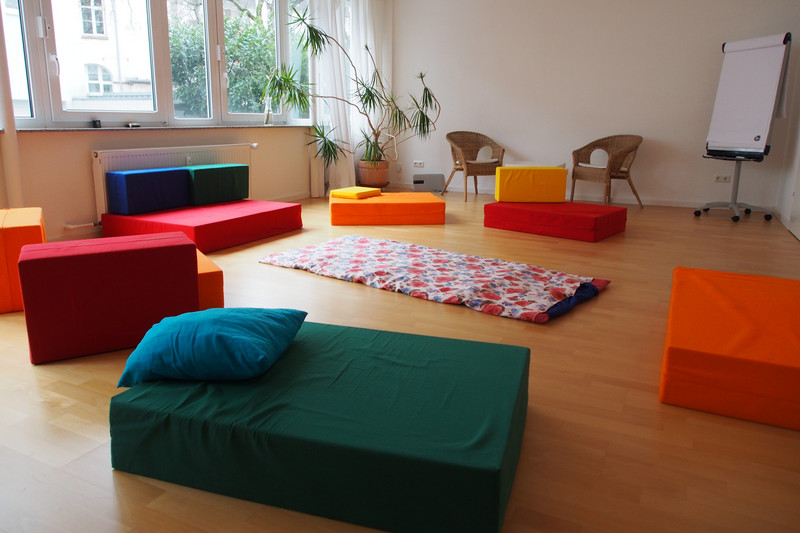 According to the Federal Office for Migration and Refugees, over 31,000 young refugees are currently being looked after in children’s and youth welfare institutions. A current glance at the national borders within the EU shows that the number of the oftentimes severely traumatized asylum seekers, as well as the level of their need, is as great as ever. Lack of knowledge, shame and culture-related misunderstandings also impede the integration process of all those who reach Germany. In this context, the Frankfurter Institut für Interkulturelle Forschung und Beratung e. V. has devised a psychosocial group concept, which enables young refugees to gradually come to terms with their situation and confidently look towards a better tomorrow. The future work of the institutions involved should be effectively assisted by a handout created from the two-year project.

Being a time of change, youth is characterized by crises, fear and uncertainty – everywhere in the world. Should the period of adolescence, however, be marked by a lack of guidance, and be devoid of any rituals specific to a particular culture, this may affect the overall development of the individual. It is precisely that threat which is posed by the very harsh experience of fleeing which is comprised of three phases: separation, transition and integration. “Without any social status and far away from all things familiar, in particular this stage of transition is experienced, by young refugees, as no-man’s-land”, explains Prof. Dr. Elisabeth Rohr, a retired Marburg University Professor, in a lecture at the Evangelische Hochschule Darmstadt, a University of Applied Sciences affiliated with the Lutheran-Protestant church.

A symposium for scientists and educationalists, as well as representatives of regional youth welfare offices – organized by the Frankfurter Institut für Interkulturelle Forschung und Beratung e. V. – was held there on October 18, 2019. Under the motto of “Pedagogic Challenges in Social Work with Young Refugees”, in a series of lectures and workshops those present jointly examined the following issues: What happens if specialist staff reach their limits in regard to their own perception, ideas and action in their day-to-day work? How can young refugees overcome the period of transition between yesterday and tomorrow unharmed? Moreover: What tools are available to overcome the differences between subjective expectations and objective conditions on both sides – namely, with young people and educationalists?

Tasks such as this were the subject of a two year-long project, likewise initiated by the Frankfurt Institute in Fall 2017, with the aim of developing a concept for transculturally oriented psychosocial group work with unguided young refugees. This specific program, going by the name of “Space for exploration and relating experiences”, was aimed at girls or young women who had fled their home country. It was supposed to bridge the gap existing between the social and medical/therapeutic areas. All 19 participants aged between 14 and 18 inclusive had undergone traumatic experiences, not only prior to and during the flight from Eritrea, Somalia or Ethiopia, but sometimes also later on. Once they arrived in Germany, they were accommodated in care facilities run by Frankfurt City Council, as well as those located in the southern Hesse District of Gross-Gerau. The joint residential situation there, with young people of different sexes and entirely different résumés, proved a major challenge. It moreover became apparent that the need for specialists with additional intercultural qualifications in dealing with the refugees was huge.

In the protected environment of the Frankfurt Institute, the young women and girls were accordingly supposed to be offered space where they could regularly meet, exchange their experiences, and provide one another with mutual support. Irrespective of their cultural or social origin, they all suffered from both the loss of vital links and the impact of mental and/or physical violence. Not infrequently, the excessive pressure and the will to unconditionally function, and fit into the system, led to an emotional breakdown. This excessive pressure manifested itself, for example, by sleep disorders, and also states of fear, depression or physical pain. At the same time, many of these young people frequently felt misunderstood, and, against this background, ended up in need of efficient psychosocial group support.

The girls met for three hours per week, in order to discuss the past and present in a protected environment, as well as share concerns and fears with the group. Moreover, supplementary classes in the local language, embedded in a framework of psychosocial support of this kind, helped to overcome obstacles to understanding. Cultural mediator Elsa Manna was always present at the meetings. The qualified educationalist with Eritrean roots came to Germany as a refugee herself at the age of 16. Today, she works, among other things, as an interpreter, and is connected with many regional institutions that provide assistance to children and young people. Her involvement, backed by profound professional and personal expertise, made it possible to win over these individuals in need to take part in the project in the first place.

The principal basis for this was mutual trust. “This, obviously, had to form gradually”, points out Beate Schnabel, too. The graduate sociologist and group analyzer led the project together with Prof. Dr. Anke Kerschgens, Lecturer in Psychological Foundations of Social Work at Fliedner University of Applied Sciences, Düsseldorf. Elsa Manna and a second cultural mediator have, in the process, provided her with essential support from the outset. All four women have been investigating the topics of “Refugee Stories” and “Migration” for years. That means that they know about the deep traces which the long, hazardous journey over land and sea has left in the body, mind and spirit of project participants. As a result, the four activists are well aware of the prerequisites for meeting up with young refugees: an open mind, curiosity and the courage to change perspective. Just as important: “A professional attitude as educators and ongoing reviews about what we do. For only through patience, restraint and not allowing prejudices to get in the way of things will the young people eventually be able to open up”, comments Ms. Kerschgens, adding, “Their own internal trauma and fear of potential betrayal, as well as the shame-oriented culture of their countries of origin, already make it difficult enough for the girls to make contact with people from other countries. To that extent, Ms. Manna’s intercultural competence and her own, most personal and familiar, résumé proved to be indispensable, robust stepping stones in bridging the gap to these refugees.”

The handout marks an attempt to firmly anchor the psychosocial group work for unguided young refugees in the Child and Youth Welfare Act in future, and thus in the financial frameworks developed to support young people. In this way, society can succeed in providing targeted aid to those arriving in the country so that they can develop their personality, as well as create a roadmap for their lives. Against this background, a specialist meeting is scheduled for summer 2020, at which three regional institutions are supposed to be won over to perform trial runs of the concept. The Frankfurter Institut für Interkulturelle Forschung und Beratung e. V. moreover seeks to continue to progress networking activities between institutions, providing assistance to children and young people, authorities, physicians and therapists, and also educational institutions.

The Frankfurter Institut für Interkulturelle Forschung und Beratung e. V. has, since 2014, been a recognized sponsor of free youth welfare and a member of the Federation of Welfare Services, known informally among locals as “Der Paritätische”. Besides the general sensitization to intercultural topics, the association not only conducts research in the field of education and communication, but also, among other things, organizes cross-sector events for specialist groups. It is closely connected with schools, physicians, therapists and lawyers. The association fosters the cooperation between the authorities, on the one hand, and child and youth welfare institutions, on the other hand.