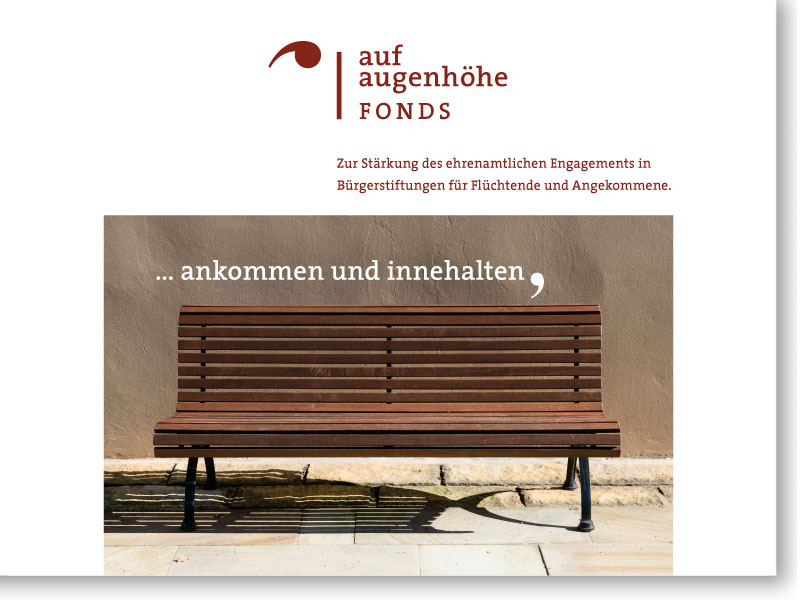 With over 500,000 euros, a diverse coalition consisting of the Software AG Foundation and 25 other partners are supporting community non-profits throughout Germany in their volunteer work with refugees. “Auf Augenhöhe” – meaning “At Eye Level” – is the name of the new investment fund, held under the umbrella of the GLS Treuhand bank and overseen by an initiative for community non-profits.

“Each of us is needed in deciding how we want to shape our society in the future to include refugees and migrants – together, and at eye level with one another,” said Andreas Rebmann, project manager at the Software AG Foundation, during the introduction of the fund today at the Cologne Integration House. The fund was initiated by the Software AG Foundation and equipped with 500,000 euros. The money will support integration projects in which dialogue and cultural diversity are prized as a form of enrichment. “What's import to us is creating spaces for creation, development, and interaction,” said Rebmann. “With this form, which allows room for freedom, the fund sets itself apart from most other forms of support.”

When it comes to implementation, the Software AG Foundation relies on local expertise: the fund intentionally supports refugee initiatives in the context of community non-profit foundations with the seal of the Initiative Bürgerstiftungen, which is a part of the Association of German Foundations. “Community non-profits are exactly the right partner for local community engagement. They are familiar with the local needs and can develop and implement solutions that are concrete, that fit perfectly, and that are not bureaucratic,” said Ulrike Reichart, head of the Initiative Bürgerstiftungen.

Cologne Foundation “KalkGestalten”to be a Part of the Pilot Phase
The Cologne Foundation KalkGestalten is one of 12 community organizations whose work will be supported in the pilot phase. Starting at the beginning of 2017, all certified community non-profits and their partner organizations can apply. Each project will be supported with up to 5,000 euros. Other participants in the pilot phase include non-profits in Chemnitz, Halle, Isernhagen, Rheda-Wiedenbrück, Stuttgart, Weimar, and Wiesloch, the Foundation for Children and Families in Melsungen, the Landkreis Fürstenfeldbruck, the Wiesbaden Foundation and the non-profit in Unser Schwabach. www.stiftungkalkgestalten.de

Integration Radio: An Example from Köln-Kalk
An integration radio show that provides refugees with a voice: this is the project idea that the KalkGestalten Foundation wants to make reality with the help of the “Auf Augenhöhe” fund. “We are trying to motivate people: show us what you can do, and we'll support you in achieving it,” said Elizabeta Khan from the board of the foundation. What's especially important to the organization in its work with refugees is to include them and thus to turn the refugees into active participants. Jakleen Rafo from Northern Iraq  one example. Her family fled from the Islamic State, and four years ago she came to Germany. Today she is active in the KalkGestalten Foundation and wants to make Integration Radio a reality. “We do this out of love,” she said regarding the motivation of the organization's founders. “Love has no boundaries, and we love all people, regardless of where they come from.”

The Software AG Foundation is an independent, non-profit foundation organised under German law and based in Darmstadt. We are not a corporate foundation, but a principal shareholder in the Software AG company, also based in Darmstadt. With the profits on an endowment of around one billion Euro, the Software AG Foundation (SAGST) has been funding selected projects since 1992. We exclusively fund projects carried out by independent non-profit organizations who provide an immediate benefit to the community. We consider it a special aspect of our work to actively initiate new projects that achieve the essential developments and objectives identified in the foundation's charter (version dated May 28, 2002). Adherence to the “Guiding Principles of Good Practice for Foundations,” adopted by the Association of German Foundations in 2006, is central to how we work. For more information see: www.sagst.de