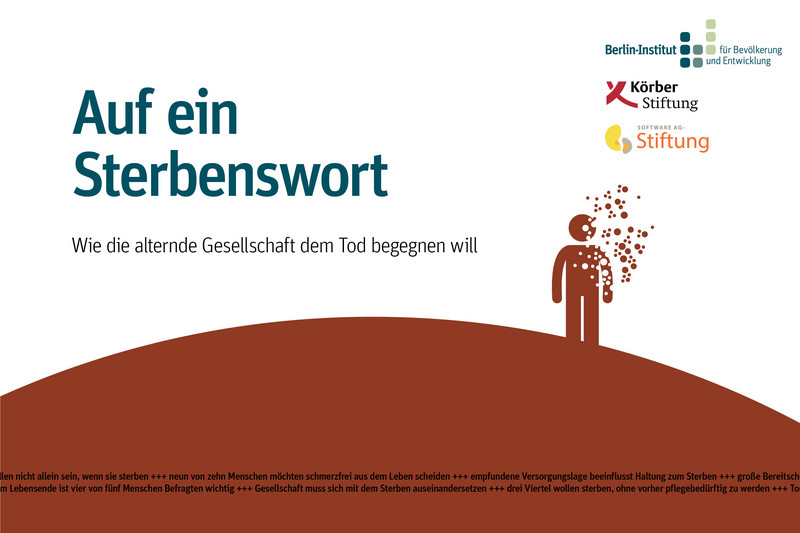 As per the results of the survey, the wishes are clear: after a long life, most people would like to depart from this earth free of pain, amidst their usual surroundings, in a manner which they themselves determine, socially integrated and well cared for. “Thus, everyone agrees upon what it means to die with dignity: both men and women, young and old, rich and poor, and whether with or without a migratory background,” comments Catherina Hinz from the Berlin Institute. “What fears and hopes people associate with the end of their own life does, however, also largely depend upon whether they notice gaps in healthcare and palliative care in their locality, and whether they have already kept a dying person company.”

Not only during the current exceptional situation, but also in normal times, many people do not have the opportunity to die in line with their wishes. How people ideally imagine it to be and the reality of it may differ even more in future than is presently the case. Thus, 76 per cent of respondents, for example, would prefer to spend their final hours in their family circle. Simultaneously, however, the number of single-person households has been increasing for years, especially among the elderly. There is also the fact that the baby boomers are getting older and themselves do not have so many children who could stand by them.

Konrad Lampart from the Software AG Foundation emphasizes the point: “The survey does give hope, after all. The majority of people are prepared to take care of dying family members or friends. This is a form of social cohesion which is to be strengthened just as much as open discourse about dying. For, if we realize that death is a part of life, and learn to face it without fear, then this may help us to get more out of life.” Besides such a change in perspective, however, relief is in particular needed for all those who are involved in caring for people in their final hours. Out-patient palliative services, the social environment and the employer can provide it. In this respect, there is – according to the survey – a need for improvement: At this point, just 22 per cent of people feel sufficiently supported by friends, the church or the local authority.

Many respondents also criticized the low number of hospices or the prevalent practice of taking those who are dying to hospital – especially when they, the respondents themselves, have already been involved in caring for the dying. In fact, the number of physicians and nursing staff who have completed additional training in palliative care has, for a long time, been rising, but there is still in many places a lack of expertise, such as that found in hospices. The survey also requests institutions which care for the elderly to train their staff in dealing with the dying, reflecting on their lives with them, and - increasingly - to also involve (trained) committed people involved in this area to guarantee better care.

The results of the survey make it clear that there is an overall need to take a different perspective on the finite nature of life than is presently the case. Seventy-five per cent of respondents considered it a nuisance that the topic of dying is suppressed in society. “It is essential to examine the topic of dying and death,” says Doris Kreinhöfer of the Koerber Foundation. “Without examining it, the individual cannot form his or her own ideas and wishes, and there is no way for his or her nearest and dearest to know where and how he or she wishes to die. Without discussing the topic. we do not know what arrangements are required to provide for those wishing to die with dignity.” In some places, new formats are already emerging, which are devoted to not only looking at the end of life as a care-related challenge, but also looking at all the different aspects of it: in the museum, with contemporary art on the theme of dying, in informal discussions on the subject in the Death Café or at the street festival where the local hospice association presents its work. Dying and death concern every individual in his or her individual biography. The survey therefore requests everyone – whether involved in the fields of science, politics or the media –, and every individual person, as well – to give the subject of dying a new place in society.

The survey “A word about the topic of death – How an aging society wishes to handle death” (only in German) and further press material is available free of charge as a download: https://www.berlin-institut.org/publikationen/studien/auf-ein-sterbenswort

The survey was created by the Berlin Institute in cooperation with the Koerber Foundation and the Software AG Foundation.

Berlin Institute for Population and Development
The Berlin Institute for Population and Development is an independent think tank, which looks at matters of regional and global demographic change. The Institute was founded in the year 2000, as a non-profit-making foundation, and has the task of honing the awareness of demographic change, promoting sustainable development, contributing new ideas to politics and formulating concepts to resolve demographic and development policy issues. In its surveys, discussion and background papers, the Berlin Institute prepares scientific information for the political decision-making process.
www.berlin-institut.org

Koerber Foundation
Social development requires dialog and understanding. With its operational projects, in its networks and with cooperation partners, the Koerber Foundation tackles challenges in the areas of activity of “Innovation”, “International Understanding” and a “Lively Civil Society”. The three topics of “Technology needs Society”, “The Value of Europe” and “New Life in Exile” form the current focus of its work. Launched by the entrepreneur Kurt A. Körber in 1959, these days the foundation attends to its own projects and events, both nationally and internationally. In that respect, it feels a particular attachment to its home base of Hamburg. It also maintains a site in Berlin.
www.koerber-stiftung.de/en

Software AG Foundation
Pluralistically oriented and anthroposophically motivated, the Software AG Foundation (SAGST) from Darmstadt enables around 250 so-called “healing impetuse” projects per year. It is not a corporate foundation, but a major shareholder in Software AG. Since 1992 its focus has clearly been on the individual and his or her development. Besides the topics of “Upbringing and Education”, “Child and Youth Welfare”, “Anthroposophic Medicine” and “Agriculture and Natural Help”, assisting the elderly and handicapped accordingly also forms one of the focal points of SAGST. It views old age as a stage of life that is of particular importance – for both the biography of the individual and community life. Against the background of the aforementioned, the charitable foundation supports projects which show ways of dealing with the challenges of an increasingly aging society that are tenable for the future. In that respect, it is particularly interested in suggestions for a dignified life in old age, as well as contributions towards the strengthening of social cohesion. A starting point for the latter is getting to know the individual and his or her individual needs in the last phase of life in an in-depth way – also beyond providing plain care and attending to the person’s material needs.
www.sagst.de/en