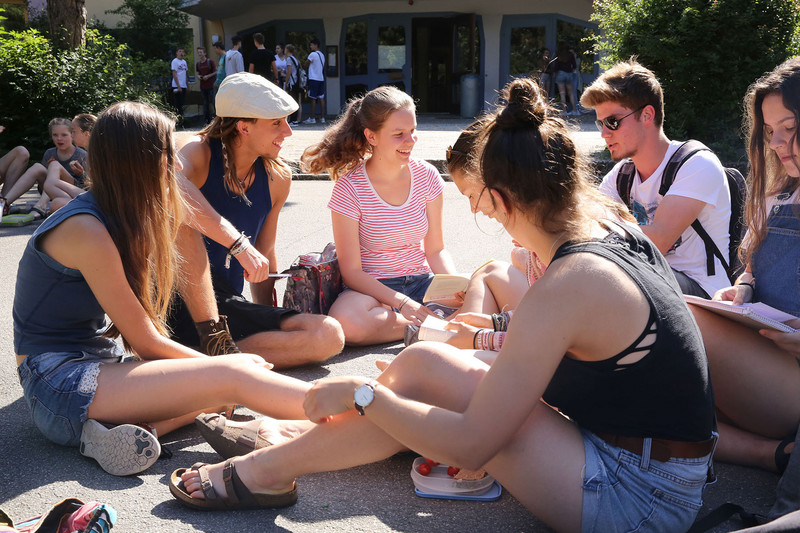 The coronavirus crisis has illustrated the importance of human contact and community – especially for young people. Remote education currently gives them a clear experience of the limitations of digital learning and makes them aware that an educational institution is more than just a place where knowledge is communicated and where they are prepared for entry into the world of work. But precisely what else should school deliver?

Waldorf schools, not just in Germany, have found answers to this question which, although on occasion they may split opinion in society, also appear very topical in a time of pandemic and climate crisis: the social togetherness of learners and teachers provides the focus of a holistic system of education which perceives the children with their personal strengths and which supports creative, artistic, practical and social skills alongside the intellectual ones. Embedded in a strong school community, education and personal development are supported in this way: everyone should see themselves as shaping their own life and society – compassionately and with a respectful attitude towards nature.

Do Waldorf schools meet this aspiration? Does their education, first set out in 1919, fit into our modern society? And: what challenges do they have to face up to today? To find that out, a team of researchers from Alanus University of Arts and Social Sciences in Alfter near Bonn asked over 3,000 graduates from the 254 German Waldorf schools. Almost 2,000 of them belong to the generation of millennials whose members were born between 1980 and 2002 and who have grown up in a largely digitalised environment. Their experiences, judgements and life journeys were collected by the publishers Dirk Randoll and Jürgen Peters in the volume Wir waren auf der Waldorfschule (We Went to a Waldorf School) which has now been published by Beltz Juventa.

Positive memories of school
The most important thing they learned or experienced as pupils at a Waldorf school, the millennials questioned in the study say, was pleasure in learning, wide-ranging learning opportunities, respect for the individual, as well as a good atmosphere and social togetherness. “Overall, we noted that Waldorf graduates associate many positive things with their time at school,” says Randoll, professor of empirical social research at Alanus University. “This is also reinforced by the fact that, according to the survey, nine out of ten former pupils would go to a Waldorf school again,” adds Jürgen Peters, who works as a lecturer at Alanus University. “Three quarters of respondents with children even send their own kids to a Waldorf school, or intend to do so.”

One reason for this clearly lies in what distinguishes Waldorf schools in Germany from other types of school: from the beginning to when they leave in year 12 or 13, pupils are taught consistently as a class. The effect of this concept, which 90 percent of respondents considered to be very important, is reflected in the study in, among other things, their view of the way school influenced their social behaviour: more than 85 percent ascribe their ability to show consideration for those weaker than themselves and being able to work on something together in a team to their time at the Waldorf school.

Creativity, personal development and delayed pressure to achieve
Asked about what motivated their own parents to choose a Waldorf school, about half of the alumni cited educational reasons: especially teaching in music and the arts as well as practical craft subjects, the holistically oriented learning environment and personal development had been points in favour of the Waldorf school – particular features of this type of school which the former pupils also highlighted in looking back. More than 90 percent judged the craft as well as music and art lessons to be important or very important. “More than 95 percent,” Randoll says, “state in this context that school had fostered the development of their creative abilities.”

In order to determine whether Waldorf schools can strengthen the development of the personality also in other ways, the research team, which also includes the doctoral psychologist Ines Graudenz, for example asked questions about the social engagement of the former pupils. According to the study, an above-average number are active as volunteers or politically: whereas 16 percent of the population are on average involved in social issues, that number more than doubles among Waldorf graduates. Moreover, almost a quarter of respondents said they were active politically. The high level of agreement that there were positive effects on self-confidence could also be interpreted as effective personal development, Randoll explains. Furthermore, the majority of respondents affirmed that Waldorf school had taught them to treat nature mindfully: “Eighty percent emphasise that their time in school encouraged a connection with and responsibility for nature,” Peters adds. This was enabled, among other things, through experiences in and with nature – for example in the school garden or as part of the agriculture work experience.

Another factor that, according to the study, favours the Waldorf school in the eyes of many parents is the minimal pressure to achieve. Here a distinction had to be made, Randoll stresses: “Whereas children and young people to year 10 have time for independent learning through discovery, and as many of the senses as possible are addressed and supported in everyday learning activities, a learning culture is introduced in upper school which is determined by preset and reproducible content in order to prepare for the final state examinations.” Accordingly, 80 percent of the former pupils in the survey said that they had been able to learn without the pressure to achieve but had been confronted in upper school with requirements for which they had not felt sufficiently prepared. The high proportion of tutoring, of which about half the pupils had availed themselves, fits into this picture. “The majority of it is in mathematics and foreign languages in advance of centralised final examinations such as the Abitur or Fachhochschulreife,” Randoll explains.

The challenge of teacher training and digital media
In the appraisal of the teachers, the study revealed noticeable differences between the assessment of their human and teaching skills and the expertise in their subject: “For most – about 87 percent – the pupil-teacher relationship is characterised by mutual respect,” Peters reports. But the qualification of the teachers in their subject, particularly in upper school, was judged less favourably: “Just under 24 percent of respondents considered them fully qualified and just under 61 percent thought they were middling,” the researcher quotes from the study. Particularly the subject expertise of upper school teachers in the sciences is criticised.

Walter Riethmüller from the German Association of Waldorf Schools raises this in a concluding chapter of the study. Alongside the recruitment of competent subject teachers for upper school, he also sees it as an “ongoing task” in teacher training, something that had been worked on continuously and with great financial commitment for the last 15 years already. “Here the study makes important points and provides food for thought,” says Andreas Rebmann from the Software AG Foundation, which financed the study together with the German Association of Waldorf Schools. “On this basis, we can in the future be even more specific in our input as part of our funding of the academic basic and advanced training of Waldorf teachers.”

One point on which the graduates tend to be lukewarm in their assessment at various times in the study is the way digital media are handled. For over half of respondents, the Waldorf school had no or indeed an adverse influence on developing these skills. Against this background, it is not surprising that a third considered digitalisation to be an important challenge for Waldorf schools.
Nevertheless, the demand to integrate new media into the curriculum and to reflect on their use had “indeed already been met several years ago,” Walter Riethmüller emphasises. He notes: “But at the time of the survey the results of that had clearly not yet filtered through to the place where they belong, namely the everyday life of the school.” However, he affirmed that the question as to the way of including digital media and the right time for their use remained controversial.

All in all, the study of Randoll and Peters illustrates that Waldorf schools in Germany develop creativity, a high level of social skills and team spirit in young people and release them with the desire to take responsibility for society and the environment. In doing so, the Waldorf school represents an alternative concept to an economised understanding of education which is affirmed by its graduates. “In view of the crises of our time, it cannot be ruled out,” the publishers say,“ that this concept for educational institutions will keep growing in importance in the present and future.”

Alanus University of Arts and Social Sciences
Shaping society fit for the future – under this guiding principle, Alanus University of Arts and Social Sciences educates the whole person, both with regard to the subjects studied and personal development. In the togetherness of art and science, the university provides impetus and opens spaces for the sustainable transformation of society. The state-recognised university is located on two sites, one in Alfter on the outskirts of Bonn and the other a study centre in Mannheim. It offers courses in the fields of architecture, fine arts, drama, eurythmy, art therapy, education, business administration and philosophy. Its Department of Education has the right to award doctorates. Currently about 1,900 students are registered, all qualifications are state-recognised.
www.alanus.edu

Software AG Foundation
With capital of more than 1.2 billion euros, the Software AG Foundation (SAGST) is one of the largest charitable foundations in Germany. It is not a corporate foundation but major shareholder in Software AG. It was set up by the company’s founder, Dr hc Peter Schnell, who in the 1990s transferred all the shares in the IT company to the foundation. Since then the SAGST has supported projects of independent charitable organisations in Europe and Brazil which exclusively and directly serve the common good. Here education is one of its main areas. Against this background, the SAGST funds, among other things, progressive education concepts and particularly the basic and advanced training of Waldorf teachers.
www.sagst.de