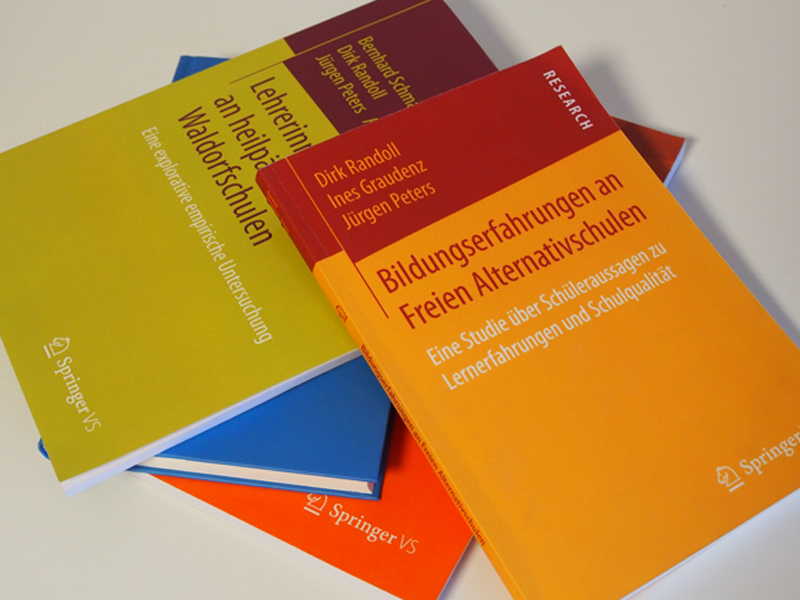 Students at free alternative schools identify very strongly with their school, evaluate the student-teacher relationship as positive, and find learning meaningful both in content and method. These were the findings of a study carried out at Alanus University of Arts and Social Sciences in Bonn. Dirk Randoll, Professor of Education, Jürgen Peters, Instructor in the Department of Education, and research assistant Ines Graudenz asked students at free alternative schools at the secondary school level about their experiences and the quality of their schools. The study, “Educational Experiences at Free Alternative Schools,” was published in August by Springer VS and was financially supported by the Software AG Foundation.

Identification and Appreciation
The findings reveal that students at free alternative schools identify well with their school. 93.1 percent of students reported that they feel comfortable at school, and 82.2 percent feel that they belong. Learning without performance pressure was, according to the students, the primary motivation why parents decided on a free alternative school. Freedom and active co-determination were cited as the second and third most common reasons. A majority of student respondents feel that their relationship to their teacher is one of trust, and around 85 percent feel that their teachers appreciate them. The student-teacher relationship is based not primarily on the school performance achieved by the students, but on respect and regard for the individuality of the other person. “Students at free alternative schools perceive that their teachers trust them. They don't need external motivation; they ask their own questions. Learning develops out of this curiosity,” said Randoll, who is a professor of education with an emphasis on empirical social research at Alanus University. More than 80 percent of students consider their teacher to be pedagogically competent, as well. About three-fourths stated that they find their lessons interesting and exciting.

More Direction and Orientation
One in two students, however, wishes for more direction and orientation from their educators. Here, the authors recommend that learning should be differentiated more strongly depending on the varying needs and backgrounds of the students, and that students should be given more opportunities for orientation. 60 percent of students also expressed that they could learn and achieve more if they had greater support. Nearly half of students were in favor of grades starting in middle school. The uncertainty of many students about whether they would achieve the diploma they were working for revealed a need for a clearer culture of performance and feedback.

A High Number of “School Switchers”
A unique aspect of free alternative schools is the high percentage of students that have switched to a free alternative school from a regular public school. This suggests that, for many students, this is an important option outside of the standard school system. Especially after elementary school, many students and parents are searching for an alternative to mainstream education. “Over 60 percent of our students are school switchers. We carried out another questionnaire at Waldorf and Montessori schools. The proportion of school switchers is by far the highest at free alternative schools,” explained Randoll. When asked about their motives regarding school choice, the school switchers mainly cited a negative experience at a previous school. “The newly acquired freedom at a free alternative school is very important for school switchers, but at the same time they have the most difficult dealing with this,” said Peters. They often see themselves as poorly performing students. The study also documented, however, that the differences between school switchers and students who have visited free alternative schools since the first grade are, by the 10th grade, nullified. Nevertheless, the integration of different backgrounds is a significant challenge. The Germany-wide Association of Free Alternative Schools, which assisted in creating the questionnaire, wants to respond to this challenge. Klaus Amann, member of the board of the national association, said: “The study made clear that you need a concept for school switchers. These new findings will flow directly into how we advise school initiatives, for example during the founding a new school.”

The Study
The study was based on a written questionnaire of 947 students who attended secondary school at a free alternative school in the school year 2013/2014. At the time of the study, the National Association of Free Alternative Schools had 91 member schools. Of the 47 schools with a secondary school level, 38 participated in the questionnaire, for a participation rate of 81 percent. Professor Randoll and his team evaluated learning experiences in Waldorf and Montessori schools in separate studies.