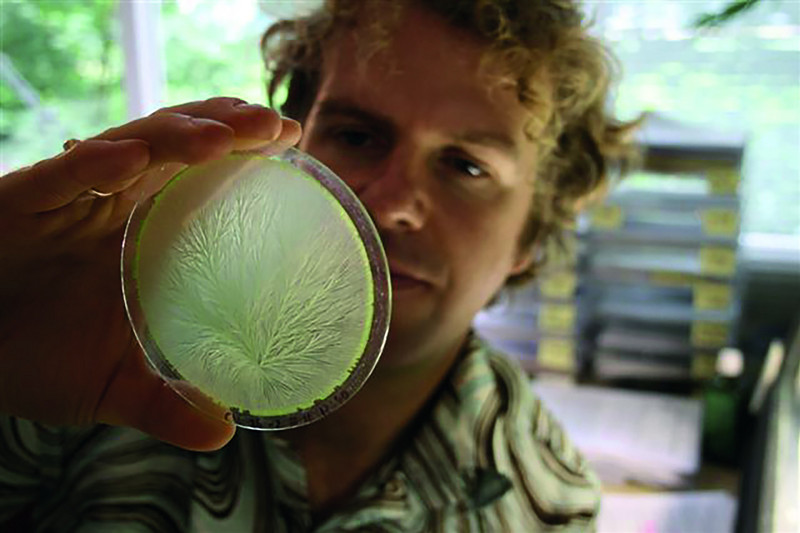 Movement as a subject in connection with the observation and evaluation of crystalline structures? What sounds absurd at first is quite understandable upon further consideration – after all, the crystallisation process is based on a moving development. With the copper chloride method, a special form of qualitative food research, scientists trace these inner processes. Copper chloride crystallisation is one method to create an image and is used in qualitative food research: Aqueous extracts of the substances to be examined are mixed with a copper chloride solution and evaporated in a petri dish under controlled conditions, forming crystalline forms. From the resulting characteristic structural differences, scientists infer certain qualitative aspects of food – an innovative extension of conventional, especially quantitative, investigations.

As Paul Doesburg explains, the purpose of this examination is to understand the dynamics of the crystal development innerly. The operator of Crystal Lab in Ottersum, Netherlands, has been working on the crystallisation method for many years. He is one of the leaders of a comprehensive research project funded by SAGST, which examines the inner path from image to qualitative assessment and also develops scientific examination and evaluation guidelines.

In order for the crystallisation to proceed unhindered, the bowls with the samples must be kept undisturbed. A high edge also stops any airflow, which would affect the evaporation of the liquid. Since the solution is warmed from beneath, there are temperature differences between the centre and the edge of the bowls, resulting in flows. “A high-resolution camera monitors the experimental set-up and provides remarkable details of the crystal formation”, explains Doesburg. “Until its conclusion, there is considerable movement in the bowls. Then the crystals retain their shape.”

Experiencing movement innerly
“Thanks to a phenomenon called kinaesthetic sensation – meaning the inner perception of self-movement – it is possible to experience movement even when the crystal is static,” the scientist continues. “To do so, the observer must engage with the crystallisation, or more precisely, the spiritual image that he has developed from intensive observation.” The kinaesthetic involvement includes not only such an inner sensation but also motor reactions to observed movements – even in inanimate objects. “The art historian David Freedberg and the psychobiologist Vittorio Gallese have presented studies in which the viewers of works of art attest to physical sensations,” says Doesburg. “For instance, when looking at Michelangelo’s ‘Prisoners’ sculptures, they felt their muscles activate, mirroring the muscular figures who appeared to be trapped in stone. With the crystallisation images, we experience this when we feel the growth, curvature and tension of the multiple branches of the crystallisations innerly.”

A central aim of the current research project is to describe the evaluation criteria of the crystallisation method in a scientifically comprehensible manner. “Of fundamental importance for this are our standardised morphological criteria: for example, the number and length of the side needles or to what extent crystallisation develops from the centre”, says Doesburg. “Based on existing ISO standards for sensory testing, we have also developed such standards for the evaluation of crystallisation processes. This is a decisive step, as these standards scientifically substantiate our inner work.” A second important factor is computer-aided image analysis: Its objectivity of the crystallisation method and visual evaluation confers a high degree of credibility.

Pattern recognition as a research tool
Thanks to these morphological criteria, i.e. concerning the outer shape, it is possible to characterise and recognise the pattern of plant physiological processes such as maturation and degradation – pattern refers to the structures in which properties are expressed that are more than the sum of their parts. The analytical examination is complemented by the fact that the examiners can engage with the movement as well as the psychologically perceived expression of the crystallisation image, which allows for the determination of even finer differences between the foods. “Pattern recognition captures complexity as a whole,” says Doesburg. “It recognises formative forces that can still be perceived in the object consciousness in this way. Such formative, dynamic processes are called morphogenesis – a phenomenon that plays a central role in Goethean research.” This research is named for the scientific work of Johann Wolfgang von Goethe, who was also looking for a kind of organism archetype and characteristic pattern features.

In order to teach the test persons the visual evaluation panel, there are regular joint training sessions that use the ‘think aloud’ method: Everyone shares their thoughts during the evaluation process with the group to make it clear which perceptual approaches they apply when working with the images. Furthermore, crystallisation images are regularly studied, whereby the panel assigns and classifies, for example, different ripening or degradation stages or different cultivation methods (conventional, organic, biodynamic). The individual assessments can be used scientifically by comparing them with each other; furthermore, the average of blind test assessments shows a very high degree of agreement. Doesburg reports: “This technique of supervised classification is a recognised scientific training approach to further develop the skills necessary for interpretation.”