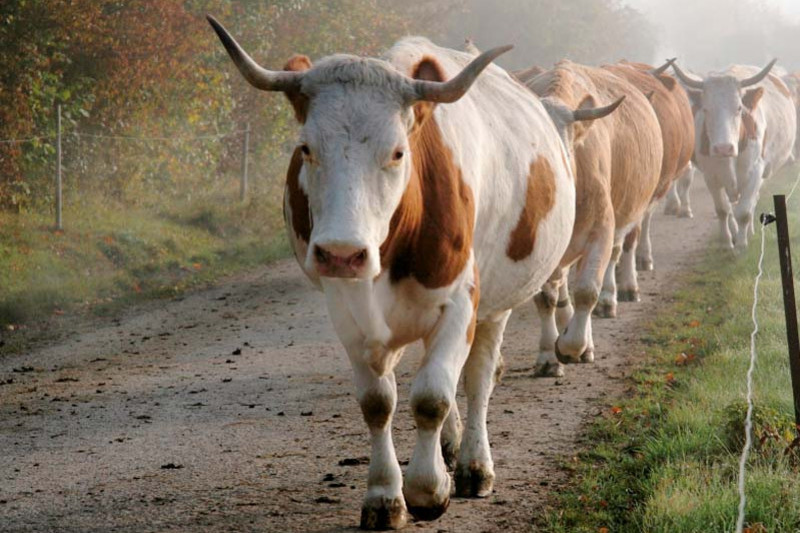 In conventional agriculture and livestock breeding, speed and high performance come first, while the well-being of the animals is often a low priority. Ecological farmers have other criteria: in dairy cow breeding, for example, they value long-lived and robust animals that are well suited to their environment. Cattle family breeding, in which the farm's own cattle lines are used for breeding, is especially suitable for organic farms because the animals are optimally adapted to local conditions. Demeter Bayern and the Swiss Research Institute for Ecological Agriculture (Schweizer Forschungsinstitut für biologische Landwirtschaft (FibL)) have made valuable initial progress in this area with the support of the Software AG Foundation.

Ecological agriculture has long since arrived in the social mainstream, and “organic” products are now available in every discounter and supermarket. And what's just as important: many consumers have a growing awareness of the issue of animal welfare, which provides for a growing demand for organically and humanely produced food. Yet many challenges remain for expanding and developing organic agriculture. One of these is in the field of livestock breeding. The steady trend towards high-performance conventional cattle breeding does not leave organic farms unaffected: organic farms also have cattle of the same breeds in their herds, and their offspring may be produced with artificial insemination by these performance-bred bulls.

Finding Local Solutions
That is why it is of particular importance to find locally-appropriate solutions, especially in organic farming - and that's just as true for animals as it is for seeds. Cattle breeds that have been bred for high milk yields have a correspondingly high consumption of feed concentrates. For organic farmers, who largely forgo concentrated feed, this becomes a problem. “Breeding for polled cattle is also rapidly increasing,” says consultant Martin Haugstätter. This is an important point, especially for biodynamic Demeter farms, where cow horns are an important part of appropriate livestock holding. “In conventional cattle breeding, the longevity of the animals, their lifetime performance, and their health hardly play a role. That contradicts the holistic concept that we pursue in organic farming.”

One possible solution is the so-called “cow family breeding” approach. With this approach, farmers breed using both male and female offspring from their own, locally-suited cow families. These animals can be used for further breeding provided that inbreeding values are low enough. Over the course of a five-year research project, Demeter Bayern and FibL have made important initial progress in this field. The result is a 20-page report that presents multiple variations of the breeding method and shows, using consulting and operations examples, how this approach can implemented.

A Need for Flexibility
Around 15 operations in Germany and Switzerland participated in the project between 2010 and 2014. Together with farmers, the researchers and consultants developed systems of milk cow breeding that are adapted for local conditions, then documented their work and the results of the project. A number of breeders' meetings supported a mutual exchange of ideas and experiences. “Over the course of five years it became clear that the processes for breeding with cow families and animals from one's own herd must be adapted for each farm,” said Haugstätter. “That was definitely a challenge, because we continuously had to adapt our plans - which required good cooperation between all of the participants!” Despite this challenge, the working hypothesis that it is possible to realize cow family breeding on small farms was clearly confirmed. The feedback from the participating farmers was also very positive: “After five years of cooperation, we have laid the foundation for a truly site-specific method of breeding our animals,” says farmer Siegfried Meyer from Mittelfranken.

Unlike other species, cattle are considered relatively resistant to inbreeding, so that it's possible to perform in-family breeding even in small herds of about 25 animals. “The subject of inbreeding was nevertheless an issue, and the question of how to prevent an overly high level of relatedness between the animals in each herd was constantly present and important,” says Dr. Anet Spengler Neff of FibL. One advantage of cow family breeding is that it forgoes the often-criticized artificial insemination of cows - a practice which is common even on organic farms. In the course of their research project on a number of Swiss organic farms, the researchers tested whether there were additional positive effects of natural insemination. The study showed that the naturally inseminated cows had better udder health and tended to have shorter calving intervals, which means they were more frequently pregnant than cows conceived by artificial insemination. “This suggests that cows are more adapted to the local situation if they are naturally mated, as the males often come from the region in which they are used,” explains Dr. Spengler Neff.

“Organic farms need animals that are well suited to their environment. That's why it's important to develop sensible breeding criteria and correspondingly to select suitable breeding animals,” says Cornelius Sträßer, project manager at the Software AG Foundation. He hopes that the detailed report, which documents the basis principles of the practice and provides practical examples of cow family breeding within one farm's herd, will encourage many more farmers to consider this breeding method. “This research that we have supported could then create wider circles of influence and thus provide valuable impetus and support for organic agriculture - not least in terms of animal welfare, which is today such a central point of discussion in our society.”