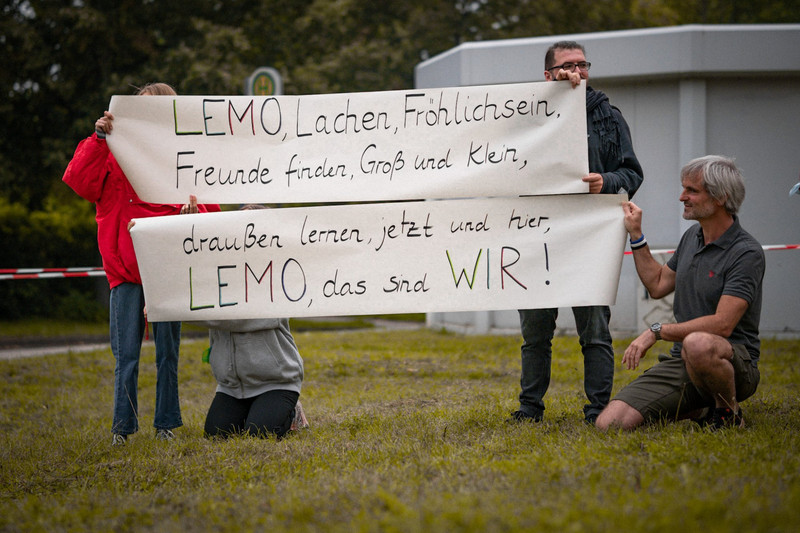 The vision is ambitious: in just a few years, a campus is supposed to emerge at the Allee-Center in Leipzig-Grünau, which will improve the educational opportunities locally, and transform the socially-challenged neighborhood into an area that is really worth living in. At the heart of it is the Leipzig Model School, a socially inclusive, social space-oriented community school, which the sponsoring association has designed with the help of educational experts from the University of Leipzig. They would like to try out new approaches to solving the challenges posed by the educational system, in a teaching and research establishment. At the beginning of the 2021/22 academic year, 48 students started to attend the school, in two study groups, encompassing various ages – initially on a leased office floor with a view over the urban green space, on which the extensive school grounds for approx. 1,000 young people from the first to the 13th grade will subsequently be erected. “We would like to be a school for the neighborhood, and be open to the entire district”, state those who are responsible for the founding project, which also includes sports facilities and a cafeteria which will be organized as a student business, and can be used by all the residents of the neighborhood.

That also applies to the “learning culture laboratory” in the pipeline, with its library, the open workshops and citizens’ gardens. As an initial access space to the campus which will emerge, it is supposed to be a focal and meeting point, a workspace and an exhibition site. Until such time as the pavilion envisaged for it has been completed, the initiative is deploying a colorfully-painted container as an outpost. This is where families from the district will have the opportunity to familiarize themselves with the school concept, and residents from the surrounding areas of all ages will be able to contribute their own suggestions about how to design the grounds and the facilities, at workshops that are to be held. “What started out as an idea for developing a small-scale model school has, in collaboration with those responsible for the adjoining areas of the city, as well as Leipzig City Council, become an extensive campus project – which is staggering news, comments SAGST Project Manager Andreas Rebmann. In particular the participative approach of the cultural and educational landscape planned, oriented towards the common good, is exemplary: “Precisely in socially-challenged urban areas, it is important to seek to exchange ideas with as many people involved as possible. It is only together that we can develop sustainable solutions to counteract the plethora of social issues of our time.”