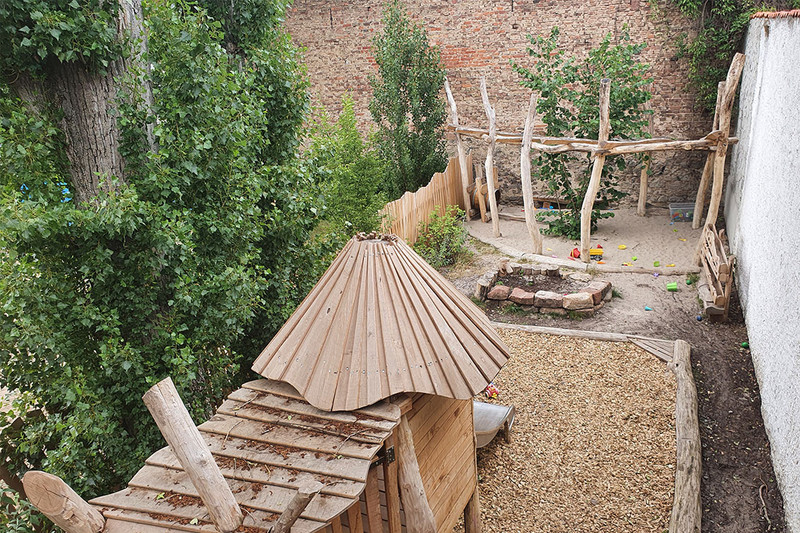 “We must learn, not from books, but through living ideas, through cheerful sociability.” This guiding principle authored by J. W. von Goethe has also been adopted by Die Wilde 13 in Darmstadt. Founded in 1994 as a parents’ initiative, the centre now looks after 64 children from the age of one to the end of their primary school years. Initially at the nursery, then later in the preschool and the attached after-school care centre, the girls and boys can grow up in familiar surroundings.

The basis for the pedagogical work here is the approach of the Hungarian paediatrician Emmi Pikler, according to which self-initiated activity, imitation and movement are at the centre of early childhood development. A stimulating, consciously prepared and protected environment where everyone feels comfortable and accepted in their individuality is particularly significant to the Darmstadt educators. At the same time, they consider personal freedom, opportunities for co-determination and reliable structures that provide safety and guidance in everyday life to be of utmost importance in the care of their charges.

Despite the close proximity to the city centre, the children spend a large part of their time in nature. In the courtyard and garden of Wilde 13, the youngest children find natural materials for self-directed play or discovery as well as numerous fields of experience that provide plenty of room for their joy of movement. Not only does this promote creativity and the ability to act, but also the perception of one’s own self-efficacy. The outdoor area, which was redesigned by parents and children in participatory collaboration with the association Naturspur e. V., contributes significantly to this.Since its completion in autumn 2021, it now includes a climbing and mud area as well as a quiet zone on the terrace in front of the group room. The dilapidated raised beds were replaced by robust new ones, which the children use throughout the seasons for everything from sowing to harvesting. Moreover, the area in Kahlertstraße was enriched with a slide hill and a crawl tunnel.

Financial support for the measures required to maintain its operating licence was provided by the Software AG – Foundation (SAGST), among others. Some 30 years after this initiative was founded south of Frankfurt, SAGST would like for its support to contribute to ensuring that the next generation is free to understand their own bodies and the world around them, enabling their entry into a lifelong respectful relationship with nature.