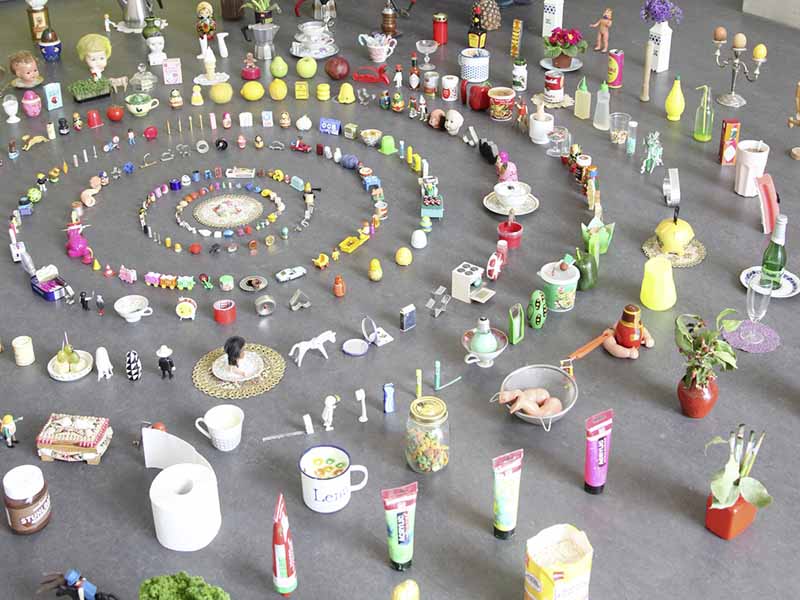 Poor ability to concentrate, difficulty spelling and trouble with maths: these phenomena can result from an innate learning behaviour in which information is more heavily processed on the right side of the brain. These individuals are called “picture thinkers”. Dirk Randoll and Jürgen Peters studied the thinking patterns of these picture thinkers and determined how they can learn best.

By Tatjana Fuchs, Alanus University of Arts and Social Sciences

On an Austrian mountain near Salzburg, at an altitude of 700 meters, sits a bio-dynamically managed mountain farm called the Obersteinwandgut. For six years, this farm was home to a school. Between stalls, grain silos and orchards, 21 school children between the ages of nine and 15 visited the “Freie Hofschule Gaisberg”. There was something special about this school: all of the students are picture thinkers. “Picture thinkers are characterized by above-average intelligence and are very creative and sensitive, but can only acquire the cultural skills of reading, writing and arithmetic partially or with great difficulty,” explained Dirk Randoll, Professor of Education at the Alanus University of Arts and Social Sciences. Together with his research assistant Jürgen Peters he carried out the first empirical analysis of the phenomenon of picture thinkers, based on interviews with teachers, students, and parents at the school in Gaisberg.

How do picture thinkers learn?
Shortly after the five-year anniversary of the school, Randoll was entrusted with the evaluation by school principal Michael Harslem. “We analysed which learning behaviours are typical for picture thinkers,” explained the professor. On this basis, the research team developed criteria to determine the methods and learning conditions that enable picture thinkers to learn most effectively. The special qualities of picture thinkers result from the fact that they think “in their right hemisphere”, as Randoll says. This means that processes like abstract thinking and recognizing details, which for a majority of people take place in the left half of the brain, take place primarily in the right half. This side of the brain, however, is rather designed to handle creative processes and problem solving, and thereby to put things in their multitude of contexts - the opposite of a detailed, focused means of thought. “The result is that picture thinkers imagine their environment”, Randoll explained - that is, they think primarily in pictures. This sheds light on their difficulties with concentration and abstraction, for example when reading: “Picture thinkers don't read, but observe the words, encircling them with their eyes”, describes Randoll. Just the word “the” results in many possible readings: the, he, tea, het, hot. A word is recognized more like a picture than as a sequence of characters. A picture thinker recognizes the meaning of a text on another level, but reading aloud creates difficulties: “A child sees the word 'piglet' and reads out 'baby pig'”, explained Peters, by way of example.

Sensitive, Social, and Easily Distracted
Picture thinkers engage more with descriptions than with abstract concepts. “This lack of exactitude and conceptual clarity naturally creates a significant problem for picture thinkers in the classic school system”, said Peters, who conducted the interviews at the mountain school. On the other hand, picture thinkers can assess situations in their entirety in seconds, including the states of mind of those around them. This ability to scan situations is carried out with great sensitivity and empathy. “Visual learners are very good at recognizing their counterparts' constitutions”, according to Peters. As a result, they can be very social. “Since picture thinkers are so sensitive, it is very important to interact with them very authentically”, agreed Randoll and Peters. Due to their sensitivity, they are exposed to a large number of impressions, which can make them more easily distracted. “This makes concentrated learning more difficult.” Ronald Davis, who coined the term picture thinkers in the 1970s, believes that many children, when they enter school, tend to think with the right brain - holistically and creatively. “This predisposition is usually not developed in schools, but suppressed. For a majority of children, this leads to adaptation to the more strongly analytical oriented type of learning”, says Randoll. But picture thinkers - around four percent of the population - do not adapt as successfully, and sometimes not at all. This was the case for the students at the farm school in Gaisberg. “Most of the children and youth here were considered unfit for school, before they enrolled in the school”, reports Jürgen Peters. The founding of the school developed out of an initiative of several parents. Together with educators, they developed a concept for a school that included both Waldorf teaching methods as well as other alternative approaches and that is based on the principle of “experiential learning”: The students help to determine the content of lessons, depending on the daily work happening at the farm or their own interests. Repairing a tractor motor might create an opportunity to learn the mathematical calculation of volumes; use of the pitchfork initiates a discussion of leverage in physics class. In learning projects, furthermore, the students can devote their attention to individually chosen topics.

A Phenomenal Memory
The teachers see their role as that of “facilitators” who provide the students access to various topics. Learning takes place in the context of a “dialogue culture”, Randoll explains. Many opportunities for one-on-one conversations, a democratically designed forum for requests and suggestions and above all the fact that students and teachers interact as equals: these have created an atmosphere in which knowledge can be successfully shared. “We have demonstrated that stress must absolutely be avoided”, said the professor in describing the research results. Under stress, the exceptional social and creative abilities of picture thinkers are undermined and they lose their “phenomenal memory”. “Pressure and force can lead to strong resistance and aggressive behaviour”, as Peters describes. The researchers identified one stress factor to be “any transfer from visual elements to written form”. Written tests are therefore in and of themselves a considerable challenge for picture thinkers - irrespective of their content. “Presentations are a much more appropriate examination form”, said Peters. As long as they do not experience stress in the situation, said Peters, the students tackle their tasks very creatively. “This is reflected, for example, is that they find their own solution strategies”, he says. In addition, the researchers emphasize the high relevance of the students' own interests: “Long-term learning is only successful with picture thinkers when they are interested in a subject and can place it in a meaningful context”, said Randoll. When this was the case, the students were able to remember extremely detailed facts. A central task of the facilitators is therefore to stimulate the interests of the students and help them to focus.Relying on Potential

About a year ago, the school in Gaisberg had to close for economic reasons. The Software AG Foundation provided the financial means for Randoll and Peters to complete the closing evaluation, which took place during the final weeks of the school's operations. “All of the children were thereafter able to continue their education at other institutions”, said Peters. The school successfully reawakened the students' joy in learning and assuaged their fear of school. “The students can now rely on their potential”, the scientist summarized. The team of researchers would like to continue to study the phenomenon of picture thinkers. “Our next steps will contribute to finding diagnostic methods for picture thinking”, said Randoll. Initial discussions about a joint project with the University of Hamburg have been successful. Currently, Randoll and Peters are preparing a seminar on the topic of picture thinkers that will take place at the Alanus Hochschule in 2015.

More Information:
The evaluation at the Hofschule Gaisberg was commissioned by the Akademie für Entwicklungsbegleitung and carried out by the Department of Education at Alanus University. The full report (in German) can be requested from akademie(at)entwicklungsbegleitung.net